The crews are out on Solo today! The following description of Solo from a student’s perspective was written by Anna McKendry ’12, a student who was a sophomore hiker is 2010, a trail crew coleader in 2011 who couldn’t go on the Expedition due to an injured ankle, and a crew coleader in 2012.  She wrote this for me in 2011, and it still rings true today.  I’ll add some scenic photos at the end of her contribution. Take it away, Anna!

The entirety of Expo is an exciting and exhilarating adventure, and Solo is just one of the many highlights. Some sophomores quietly dread the 36 hours “alone” in the wilderness, while others look forward to having some time alone to think. Either way, Solo is a momentous occasion for every sophomore, and every sophomore takes something different from it.

Personally, I was excited for my Solo. I was a little bit intimidated because it was supposed to rain, but I was beyond excited to read my letters and, most importantly, sleep! I think that’s one of the things that gets forgotten about Solo — while you may have put a lot of energy and time into writing those nice letters, the sophomores are going to sleep for at least half a day before they even begin looking at their letters! For my solo, we got dropped off at our spots in the late afternoon. All our Solo spots were placed strategically around a hill so the coleaders could check on us and so we wouldn’t be able to see the other sophomores. I had a nice spot between two trees on a hill and I was able to create a nice little ridgeline tent with my tarp and some p-cord. Mine didn’t take too long to set up, but my instructor, Mr. Czerny, helped me with a few knots and tricks; using some of his knots, I was able to tighten and loosen almost all of my ropes, meaning I could adjust if the weather changed. While my tent would have been fine without adjustable knots, Mr. Czerny’s help made it just that much more comfortable. The instructors always check the sophomore’s Solo tents to make sure that they can withstand the elements to the best of their abilities. Some sophomores aren’t given the best of spots; some only have one tree, some have three trees closer together, some are on a hill, etc. The idea isn’t to make it entirely easy, and for the most part, sophomores get creative and take quite a bit of pride in their Solo huts.

Once we had all built our “tents,” we went back down to the main campsite for food. Some of the sophomores in my crew requested some extra help with their camp and others wanted to go over Solo rules. We ate a hearty meal of rice and beans with tortillas and cheese and Mr. Czerny briefed us on the rules. We were to tie a bandanna to someone visible on our tents if we needed something, but otherwise, we shouldn’t need to talk to the coleaders. We were to leave our water bottles close to the edge of our tent if we needed them refilled, and his “thumbs up/thumbs down” way of communicating was all we would need. He also told us that he would drop off our Solo letters the next morning or day, depending if we were awake or not. We all eventually made our way to our Solo camps and I imagine that the majority of us went straight to sleep!

For me, the only thing I wanted to do was sleep. Until I was given the option of resting, my body was happy with the idea of hiking for 11 days. However, once I realized that I would have 36 hours to myself, I never wanted to rest more. While I wasn’t in bad shape, sudden intense hiking for 5 days doesn’t exactly make your muscles entirely happy with you. When I got back to my Solo spot, I made sure everything would be out of the rain, I wrote a brief intro in my journal, and then I was out like a light. I slept until early afternoon of the next day. It was glorious.

Each sophomore will have a different experience with their letters, but this was mine. While most all of the sophomores get letters, some aren’t as sentimental or meaningful as others. When I got my Solo letters, I was rather apprehensive to open them. I trusted that the people who had written them had said kind things, but I was still unsure of how they would affect me. I had short letters from friends, saying that they were glad to have me as their pal, and I had much longer letters from my parents, reflecting on who I was, how I influenced people, how I was a positive thing in their life, and many more aspects. My parents knew that I would have a lot of time to think, so they gave me “topics” to think about, and I chose to “respond” by writing in my journal. With each letter

I read, I wrote something in my journal. With some letters, I wrote direct responses to the person, and with others, I wrote about what their letter made me think. My letters were very kind and a lot of them address what kind of person I was. With the letters, I was able to see what other people thought of me. After 5 days in the wilderness, I also had a different view of myself, as I had accomplished a lot more than I realized I could.

For the rest of my Solo, I spent the time sleeping, rereading my letters, writing in my journal, and just enjoying the wilderness. I had slept all of the first day, so I spent the second night just watching the moon go across the sky. I had decided to camp on what seemed to be a “gopher highway” — I could hear gophers running around underground beneath my sleeping pad! It drizzled for the majority of my Solo, but I found a few times where it was dry enough that I went outside my tent and sat on an old burnt log near my tent. There wasn’t ever really a time where I was super hungry or wishing I had food. I was so tired for the most part that it didn’t really bother me — and that means a lot, because I eat so much!

The next morning, we all made our way back to camp. We all had fun stories from our Solos, but we were all most excited for breakfast — we had chocolate chip pancakes! It was a lot of fun to make them and be there with our coleaders again. Our coleaders had kindly boiled all our cups and bowls to sanitize them, so everything was nice and clean. They organized the food and repacked some things to make sure nothing was leaking. We devoured

the pancakes and we laughed and rejoiced as we were back with our crew. You really do create a family out there, and being away in Solo is nice because you get to think, but reuniting with them was really fun as well.

So, I can’t really tell you how your sophomore’s Solo will go. They will definitely sleep for a long time. They will most likely enjoy the letters they receive. They will probably contemplate who they are. They might be upset to be on their own, or they might rejoice in some time alone. Each sophomore will have a different adventure, but I guarantee that each sophomore will take something valuable from the Solo experience. 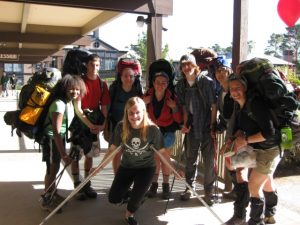 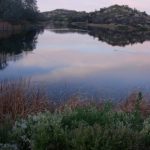 a lake in Henry Coe 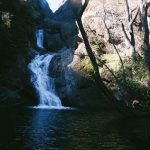 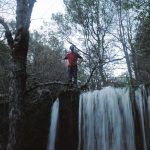 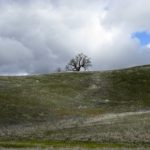 tree on a hill 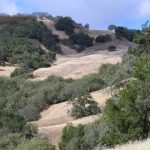 hills that remind me of clouds