Solo is scheduled to begin tonight, although it is possible that some instructors will modify their schedule to begin solo at a different time. Those of you familiar with our program know that Solo is one of the most important parts of the trip. Solo is a time for the sophomores to be alone with their own thoughts. It is a contemplative time, and includes an optional fast. Solo begins at night after a large supper, continues the following day and a second night, and then concludes the second morning before a large breakfast. Sophomores are encouraged to focus on what they have learned about themselves in the first part of the trip, and perhaps to make resolutions for the second part of the trip and for their lives in “the real world.” Read on for specifics of what ideally happens before, during, and after Solo. 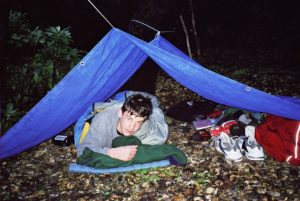 Before Solo: The instructors and coleaders will select a Solo site for each sophomore. The sites should ideally be out of sight of any other Solo site, but within hearing distance of the whistles they carry. The result is usually a string of Solo sites stretching out to either side of where the instructor and coleaders are camping, or a circle of sites around them. They keep the same things in mind choosing the Solo sites as they do choosing their own sites (no dead tree limbs overhead, no ant hills, no danger of flooding, and a scenic view if possible). The instructors and coleaders then assign each site to a sophomore, bring the sophomore there and offer suggestions as to how the sophomore might go about setting up his or her Solo camp. Sophomores are given a Solo tarp (a 12 foot square of waterproof blue plastic) and plenty of cord with which to build. If there is a sophomore whom the instructor knows needs extra attention, say one who has a cough, or one who is nervous about being alone, or one who has blood sugar issues and needs snacks during Solo, that one will usually be placed closer to the instructor and coleaders’ camp.

While the sophomores set up their sites, the instructors set up a camp with plenty of sleeping space next to their own (in case a sophomore feels the need to “break” solo and return to the main camp), and start cooking a big dinner for the sophomores. The sophomores gather for dinner together and have a chance to talk about Solo rules and suggestions for what to do with their time before saying goodbye for up to 36 hours. 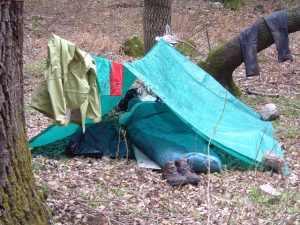 During Solo: I’d like to tell you that every sophomore spends the entire Solo in meditative contemplation about how to be a better son/daughter, sibling, student, and person. In fact, most sophomores spend only some of their Solo time in this manner. They spend most of their time sleeping! They may also clean their clothes, air out their sleeping bags, make gifts for others in their crew, and, of course, read the Solo letters that their friends and family wrote for them. Our experience is that Solo letters get read several times over, as the sophomores have little else to do. They may also write in their journals, and many are encouraged to write letters to themselves, to be delivered to them in one year. For obvious reasons they are not allowed to leave the boundaries of their Solo sites (usually about the size of a living room), nor climb trees, nor swim, nor whittle.

The instructors and coleaders spend their time checking on the sophomores unobtrusively, and cleaning and repairing any of the crew’s gear that needs it, but mostly by relaxing. Checks are done differently by different instructors. Some will pre-arrange a signal for the sophomores to give if they want food, a water refill, or just a bit of human contact. It is not easy to be alone with only your own company for 36 hours! Sophomores are told that if they feel they have to “break” Solo they should do so by talking to the instructor and coleaders, not other sophomores, so as to respect each others’ Solo experiences. A sophomore who feels there is an emergency is encouraged to blow his or her whistle. The rule is, if you hear a whistle, you blow your own and stay where you are. When the instructor and coleaders hear the whistle, they go to find the trouble and offer help. 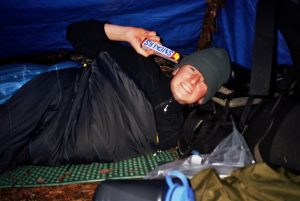 After Solo: Most instructors and coleaders prepare a big breakfast for their sophomores, and then let them know Solo is over. The crews reunite over a big breakfast. They are generally well-rested at this point, and have a new appreciation for their companions (absence makes the heart grow fonder, after all). Many have also come to a new understanding of who they are and who they want to be. It is exciting to take part of the post-Solo conversation that reunited crews have!

Then the crews pack up, and it is back to business as usual in the woods, hiking, cooking, eating, and sleeping. It may be only the instructor and coleaders who notice that the crew is suddenly working better together.