Expo 2022 — Day 10, Transition to the Frontcountry, and Pickup Times on Monday 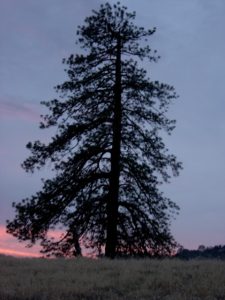 Those of you in the Monterey area know that we might have a rain storm tonight and tomorrow. Please read my post from Day 2 for my thoughts about weather.

The last full day of the Expedition is a bit bittersweet. Each instructor will be sure to spend time with his or her crew in a discussion about what they learned (we are teachers, after all), and what the Expedition meant to them. It is wonderful to hear what the sophomores appreciated about the trip and each other, what fears they had that were silly, what fears they had that weren’t, and what changes they plan to make in their lives after the trip. The instructors will also talk about how to handle the transition from the woods to civilization.

It took the Expeditioners eleven days to get used to being in the woods, and it may take a while to adjust to being in civilization. I remember being shocked by the variety of colors and smells in the grocery store, very different from the consistent gentle greens and browns of the woods. People who have just returned from the woods may tend to walk away from a sink without turning off the water, because they hadn’t turned off the creeks in the woods. They may be unused to sleeping alone in a room, having been in the constant company of their crew for the past eleven days. Life without a crew can seem lonely at first. As I mentioned in yesterday’s update, our hikers will probably also have lots of stories to tell! 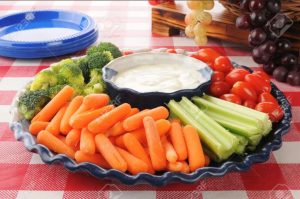 Although the meals they eat on the Expedition are nutritious and energy-providing, they lack variety, including no meat and no fresh fruits and vegetables. Our friends returning from the woods may crave foods that are unusual for them, and may eat more than usual for a few days. All of this is normal and appropriate, and in general they should obey those cravings for a few days. The exception is that they should be wary of eating too much meat or greasy foods, as their stomachs have become unused to such things and it is best to ease back into that sort of food. The sophomore who heads straight to In-and-Out for fries and a 3-by-3 burger (three meat patties and three slices of cheese–eww) is likely to be uncomfortable later. 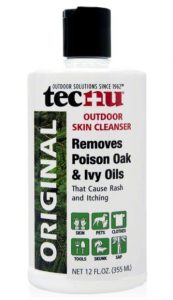 Hikers will be warned by the instructors that those living with the hikers who might have an allergy to poison oak should be aware that they and everything that went into the woods with them are likely to be covered with the sticky oil (urishiol) that poison oak oozes and which is responsible for raising nasty rashes on a good portion of the population. A good way to remove urishiol from the skin is with cold running water. A better way is with cold running water and a washcloth, and the best way is with cold running water, a washcloth, and either Dawn dish soap or Tecnu, a product that can be found in pharmacies. Laundry can be done in hot water, and other gear should be hosed down or even washed, again with cold water if using ungloved hands to do the washing. The combination to avoid is warm or hot water, skin, and urishiol, because the warm water opens pores and allows the urishiol deep into the skin. Sleeping bags can be washed in a front-loading machine on gentle cycle, with little soap. The instructors will suggest to the hikers that they start their first shower with a few minutes of cool water before the luxury of hot. If no one in the hiker’s household is allergic to poison oak then the hiker and gear can be treated as merely dirty rather than dangerous. 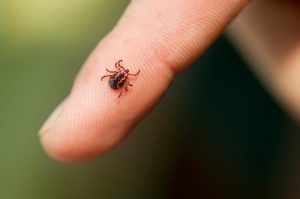 During the trip the instructors have asked the hikers to do regular tick checks on themselves, and will explain that after that first shower each they should take advantage of their bathroom mirrors to do a thorough check for any ticks that might have escaped detection. There are a few ticks in Henry Coe that carry Lyme disease, although fewer than in other areas of the country thanks to the Western Fence Lizard. Lyme disease presents with a bulls-eye rash around the tick bite and flu-like symptoms early on but later becomes much more difficult to detect and treat. If a hiker develops those symptoms in the next week or so, let a doctor know that he or she has been out in the woods and may have had a tick bite.

Our best guess is that the sophomores will be back at school between 1:00 pm and 3:00 pm tomorrow (Monday), but that is an estimate and may not be perfectly accurate. Watch this blog tomorrow for a better estimate, and I’ll also send a text to those parents/guardians with US cell phone numbers. I will post a better estimate of the arrival time about half an hour or an hour before they return to school. The sophomores will be greeted with a snack reception and school employees will be on hand to let the residents into their dorm rooms to unpack from the Expedition, shower, and repack for the rest of their break. Resident sophomores will not be allowed to stay in the dorms Monday night

The coleaders and instructors will be back at school later in the afternoon on Monday, perhaps around 4:00 pm. They should be available for the morning and early afternoon of Tuesday to help with cleaning and stowing the school-owned gear. They will be able to contact you themselves with an updated pickup time.

I’ll share some pictures of sunsets from previous Expeditions below. When I look at these I hear Taps in my head from childhood scouting experiences. 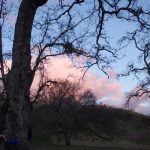 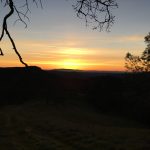 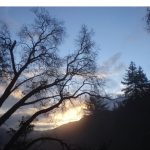 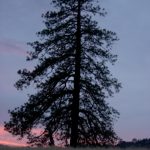 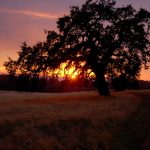