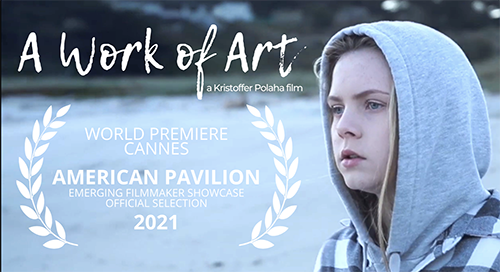 Actors Kristoffer Polaha ’95 and Sylvie Maris ’19 made a short film, “A Work of Art,” that was honored among seven finalists worldwide in the American Pavilion’s Emerging Filmmakers category at the prestigious Cannes Film Festival this May.

Steph Pratt, who created the filmmaking program at Stevenson and produced the film, received generous support from the School’s Wickersham Family Fund to help fund the trip to Cannes to join Kris and Sylvie, his daughter. Throughout the festival, Steph, who is fluent in French, shared daily interactive reports with his Making Movies and French classes via social media.

The film promotes suicide awareness and offers a message of hope in the context of teen mental health, played out in the relationship between Jamie, a struggling adolescent, and Owen, her uncle. Sylvie conceived of the characters and their world when she was 16; she and Kris ultimately collaborated to complete the script, which involved several improvised scenes, as well as complex ocean shots. Kris and Sylvie were often underwater for these scenes, which proved challenging and scary.

For Sylvie, the film champions a sensitive and important topic. “Looking back now,” she explains, “I created Jamie so I could have someone to root for—but pulling from my own struggles to play her helped me root for myself. It’s difficult to portray depression and suicidal ideation artistically without glorifying it, but it doesn’t mean we should shy away from trying to accurately depict mental health struggles.” 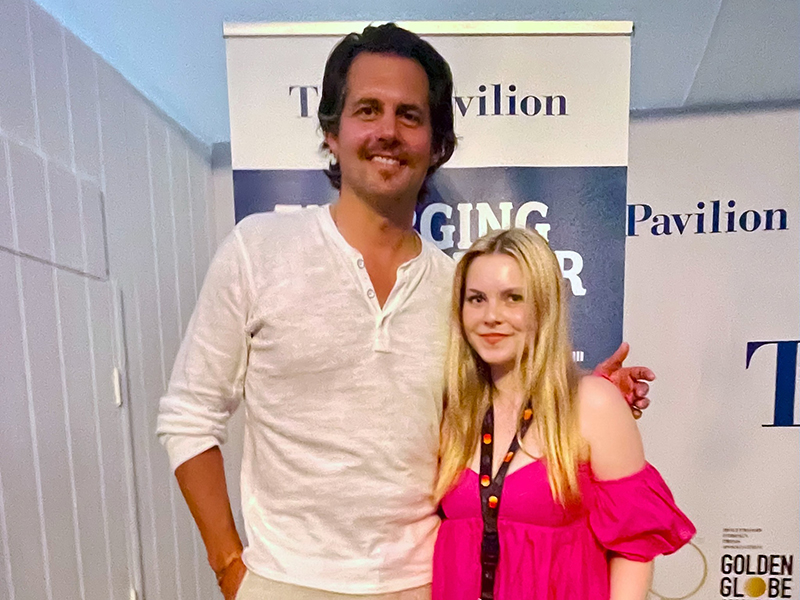 The film is a directorial debut for Kris, who book-ended “A Work of Art” with roles in two Hollywood blockbusters: “Wonder Woman 1984” and “Jurassic World: Dominion.” When Kris reached out to editor Barrie Wise ’95, a former fellow Day Hall resident and Stevenson theater tech alumnus, Barrie was editing the CBS drama “NCIS,” but was available to help because of Hollywood’s pandemic work stoppage. The film’s original score was composed and performed by LA-based session musician Joe DiBlasi, known for working with Pink Floyd and John Williams. The team then added producer Emily Skyle, whom Kris knew as executive director of the Cordillera Film Festival in his native Reno, a move that has helped “A Work of Art” get festival attention. All of them worked for free.

Steph also served as the film’s production designer, artist, and “all-around wrangler.” He included his Making Movies students as interns, providing invaluable on-set experience for many who continued filmmaking in college: Alexander Barrett ‘15 (Chapman/Dodge), Flora Fei ’17 (Emory), Sean Chow ’18 (NYU Tisch), Eric Yu ’19 (Emerson), Jimmy Cork ’18 (Connecticut College), Raymond Cai ’18 (Boston College), and Jordan Liu ’18 (Tufts). Former faculty member Sarah Howard ’09 served as Sylvie’s stunt double and, along with Ryan Niesen ’19, provided safety for water scenes. Stevenson arts faculty colleagues Joel and Christy Fricker oversaw cameras and makeup, respectively. “Everyone who contributed to making this film put their heart in it, and it felt like the project leveled up with every wonderful person that stepped onto the team,” said Sylvie. Steph adds, “I’ve taught five cycles of students during our run that have learned with me from our experience in real time. It’s so cool!”

Filming was challenging. Sylvie was at NYU, Kris was in London filming “Jurassic World.” There were two frenetic weekends of shooting over two years, complemented by forays into Stevenson’s swimming pool, Stillwater Cove, and other ocean access points. Some stunning sequences were filmed “low-tech” by Kris in his swimming pool in Thousand Oaks, incorporating fishing line, dried ice, and a glass of milk (a technique that Steph remembered Steven Spielberg used to shoot a scene for “Jaws”).

The film’s journey has already included an Academy Award®-qualifier in Cleveland and a win for best short in Arizona. Non-profits have reached out to partner with the film to promote youth mental health awareness. “On the red carpet at Cannes last week, Kris, Sylvie, and I were amazed to recall Kris’s prophetic comment at our very first shoot four years ago. He looked around at us—a group of high school teachers and students–and said, ‘Hey guys, you never know…this film could take us all the way to Cannes!’ We all laughed politely, but here we are!”