The Making of “Light of a Clear Blue Morning” 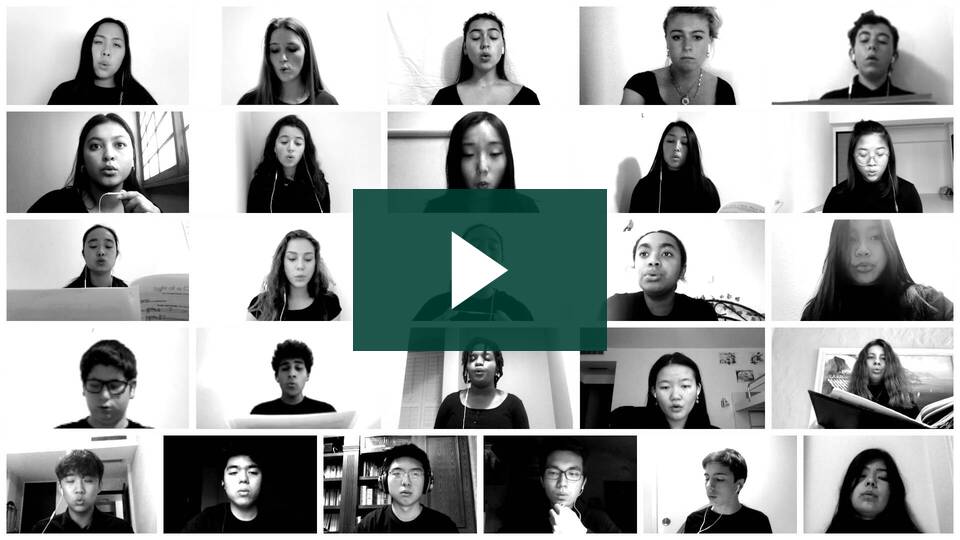 The Making of “Light of a Clear Blue Morning”

Because of the limits of internet technology, Stevenson’s choral ensembles can’t sing together anymore. And yet, for the sake of their community, they made a pro-grade video of Dolly Parton’s hopeful song.

Before students were sent home to quarantine with their families in mid-March, choirmaster Willow Manspeaker’s choral ensembles were rehearsing for their spring concert, scheduled for May 1. The students were set to perform what Manspeaker calls “great opera choruses”—maybe a fun choice if you’re standing shoulder to shoulder on a stage together in happier times, but less than ideal sung from your separate desks in your separate bedrooms during a pandemic.

To make matters more complicated, internet technology does not allow for students to sing in real time together online (because of the inevitable delay, buffering, and connections going in and out), and so even rehearsing together is impossible. What most choral students love about choir—the feeling of breathing and blending voices as one—is gone. So in order to keep her chorus and advanced choir together, Manspeaker had to pivot.

“We had to have some really hard conversations,” says Manspeaker, “about how the beauty of creating music in a room with people you like is so rewarding, but now we have to shift our focus to a little bit: what we can do is produce videos that give us the chance to bring a little bit of optimism into people’s lives.”

Public service is not a stretch for Stevenson’s choral students—it’s always been part of the curriculum: every Christmas they spend a 12-hour day singing at the local hospital, at assisted-living facilities, at local hotels, and on the street.

Kylie de Jesus ’20, one of the advanced choir students, says, “Ms. Manspeaker picked the theme of encouragement and community since I think that’s what everyone needs right now—a sense of community through these hard times that we’re all going through.”

Andrew Mansour ’20, who was part of the National Honor Choir last year, agrees. “Obviously, everybody is super stressed out now. So us posting these videos is a good way to distract other people from any problems or any stresses that they could be having.”

Thinking of what the students could sing that would give people hope, Manspeaker remembered a pretty rendition of Dolly Parton’s “Light of a Clear Blue Morning” sung by an all-female choir, and so she looked around for an arrangement that included male voices. She found one done in eight-part harmony by Craig Hella Johnson. Now the trick was figuring out how to create the illusion of 30-odd voices blending together when none of the singers could hear each other while they were recording.

“Normally when you’re singing in a choir,” says Lina Fang ’20, “you’re listening to everyone around you and adjusting based on how that sounds. But now, in this setting, you’re just alone, and so you have no idea how it’s going to fit in with the whole piece.”

Though international virtual choirs exist, this was a first for Stevenson students, many of whom have been singing together since freshman year. (Last year, almost to the day, the advanced choir went to New York and sang at Carnegie Hall. This year they were scheduled to perform at a spring choir festival in San Jose before taking in Book of Mormon.)

To start, each student had to learn his or her part during class time on Zoom: in individual chat spaces in that app, they’d sing with pre-recorded “part tracks,” and Manspeaker would occasionally pop in to listen and give feedback. Around the same time, Manspeaker videotaped herself conducting to a professionally recorded choral version of the song, so the students could follow her while having the choral version in their ears. The trick, during the actual recording, done by each student in the privacy of their own home, would be blending the vowels and stopping and starting at the exact right moments.

The other tricky part for the students was rehearsing and recording in a house full of family members. Part of the beauty of being in a choir versus singing on one’s own is the ability to get lost in the crowd. Manspeaker sent an email home asking families to give their choral students some privacy.

“It depends on the family, obviously,” says, De Jesus. “I’m an only child, but a lot of other people have siblings that are also doing online classes where loud singing doesn’t work. It’s been hard for a lot of other people to find a quiet space where they can do these recordings and just have the time to sing.”

But sing they did, and after the recordings were made (which took several takes on each student’s part, because if you messed up, you had to start over from the beginning), a middle-school parent, Jesse DeCarlo P ’25, edited them together.

“I just burst into tears when I heard it,” says Manspeaker. “It was like my heart opened up. I hadn’t heard my kids sing together for a month, and I’m a choir teacher! That’s why I do this, right?, because it feeds me.”

“It was pretty emotional for me, too,” says De Jesus. “Just because, you know, so much of my day back at school was going to choir, being with those people, hearing them sing, and singing with them. I miss it. So being able to hear all of us singing together, it was really nice. In some ways I think it’s the closest that it can get to being together.”

Click here to listen to “Light of a Clear Blue Morning” performed by the Stevenson choir.