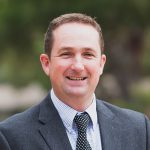 Dan was raised in the United Kingdom, attending an independent boarding school in Truro, Cornwall. In an environment very similar to the Monterey peninsula, he grew up by the ocean, spending much of his time in and on the water and playing a range of typically British sports (cricket, football, rugby, and golf).

He studied Biological Sciences at St. Hugh’s College, Oxford University, and was awarded an academic scholarship in his second year as recognition of his research work, which was published while he was still an undergraduate. From there, he went on to receive a PhD in Zoology, with a specialization in behavioural neuroscience, from the University of Cambridge. Dan’s first experience of working in California came via a postdoctoral research fellowship at the University of California, Davis, where he conducted research, lectured in Advanced Animal Behavior and served as a mentor in the McNair Scholars program, supporting first generation college students interested in research. His research work on learning and memory has been published  in journals such as Trends in Cognitive Science and Physiology and Behavior and in the academic textbooks Neuropsychology of Memory and The Evolution of Cognition.

In 2000, Dan transitioned to teaching at the secondary school level, first gaining his PGCE (a British graduate teaching qualification) at the University of Cambridge followed by his first full-time teaching position at St. Columba’s College, an independent boarding school in Dublin, Ireland. At St. Columba’s, he served as director of technology, taught science and biology, worked in the residential program, and coached provincial title-winning rugby and cricket teams. He returned to the UK to teach at Sevenoaks School where he was the assistant housemaster in the International Center, a dormitory with 60 students from over 20 countries studying the International Baccalaureate (IB). He taught IB and iGCSE Biology, and coached multiple sports.

Dan emigrated to the United States in 2007 after marrying his wife, Dr. Holly Sliger, a San Jose native and internal medicine physician whom he met at UC Davis. They lived in Portland, Oregon for 10 years, welcoming their children Ruan and Rosie to the world. Dan taught integrated science, Environmental Science and Policy, advanced Biology, and a number of science electives at Catlin Gabel School, and coached varsity soccer and golf. During his decade at Catlin Gabel he served as science department head, dean of students, associate head of the upper division, and for five years was head of the upper division. In 2017, Dan accepted Stevenson’s invitation to take up the position of head of the upper division.

Dan and his family live on campus with their border collies, Alfie and George, and they enjoy traveling to visit family in the UK so the children can learn about their British heritage. After 30 years of playing competitive soccer, Dan has slowed down to embrace the more sedate pace of life on the golf course, spending much of his free time with his son out on the incredible variety of courses on the peninsula.